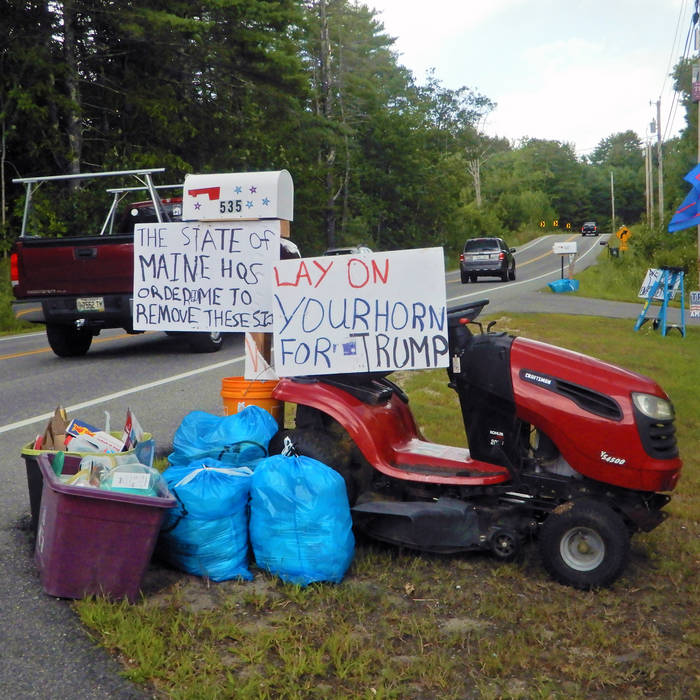 "I live out in the sticks along a bucolic but heavily travelled road. I share a driveway with my neighbor who is an ardent Trump supporter and who has, with nary a word about politics exchanged between us, correctly determined that I am not. My very existence seems to upset him. I like that. He has put out on his lawn (and occasionally on my half of the property) an increasing number of both official and handmade Trump signs.

At some point he was visited by the town public works who instructed him that he had too many campaign signs on his lawn and he needed to reduce the number of them and move them back from the road. What you see in the picture is his response. Fancying himself a rebel, he thought the Maine state government was conspiring against him and his righteous display. Sadly for him, the truth is less glamorous: I called them myself.

The sign you see here was up for about a week, and for all hours, day or night, people would lay on their horns in support. Honestly, the beeps were less frequent than I had initially anticipated, but even as I sit here weeks after the signs have been taken down, there are still residual Trump enthusiasts occasionally tooting away, or, perhaps some, maybe the ones that lay on their horns at 3AM, are honking ironically. It's what teen me would have done.

So, trying to make the most of the situation, I put my tuba out by the road with a microphone in it and recorded the sound of the passing traffic and the occasional honks reverberating inside the horn during the 5 o'clock rush. I fed this sound to myself inside the house, where I improvised along with what I heard using only the tuba's mouthpiece, and my voice.

Regardless of the results of the election, I plan to play this piece at top volume through a loudspeaker in the driveway the day after Election Day."