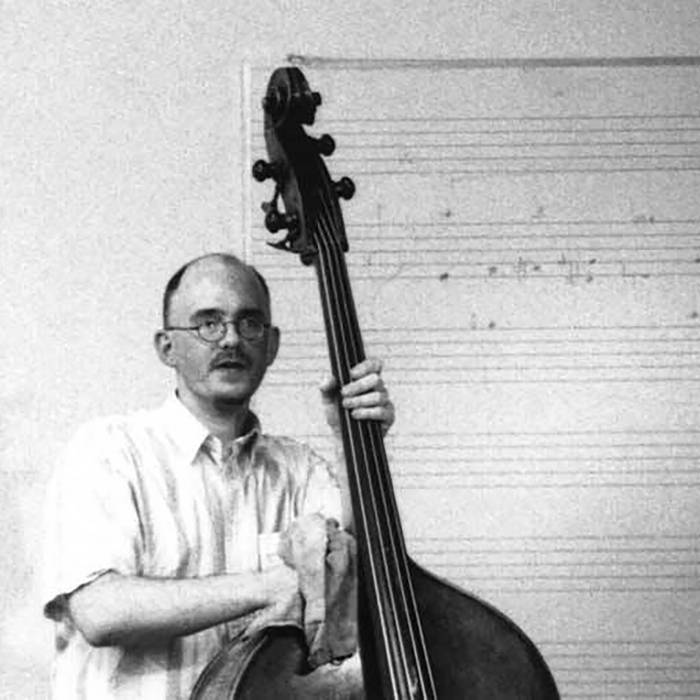 Photograph of Simon recording Composition No. 30 on the 7th of April 1998 by Jo Fell

At the beginning of the month, I heard that Simon Fell was seriously ill in hospital with advanced cancer. Today I heard that he passed away this lunchtime.

Simon was a portal for me into improvised music. In May 1994, I chanced upon a concert by Peter Brötzmann, Willi Kellers, Alan Wilkinson and Simon Fell at the Grapes Inn, Sheffield and I was blown away. The next time I saw Simon play was a year later at Dr Brown’s pub in Huddersfield, this time with Alan Wilkinson and Paul Hession. I was entranced by his energy and commitment to the moment. He played his bass with unfettered abandon and precision, with a beatific look on his face. I was young and felt I had nothing to lose, so I plucked up the courage to talk to him after the gig and ask if we could play together. In a typical instance of his generosity of spirit, he said yes and the next day we met and played: it propelled me into twenty years’ engagement with improvised music. We have played together in so many formations over the years: the Simon Fell Septet at the Purcell Room (1996); as part of the infamous Butch Morris’ Conduction tour of the UK (1997); as part of Derek Bailey’s Company in New York and Marseille (2001 and 1999) and as part of the London Improvisers Orchestra. I have performed many of his compositions and been part of his ambitious big band formations and recorded projects (Composition No. 30: Compilation III and Composition No. 62: Compilation IV), as well as his immense BBC Radio 3 commission ‘Positions & Descriptions’ for the 2007 Huddersfield Contemporary Music Festival.

Most notably, we played together as part of the trio IST (with Mark Wastell). In 1995, when we first played as a trio together, I was so ecstatic, and drove back from Chelmsford to London is some kind of delirious state. And I was so happy when I found out that the music from that first meeting would appear on an LP called 'Anagrams to Avoid' (1997). We played many extraordinary concerts together: as support for Derek Bailey and John Zorn at the Barbican (2000), a stunning concert at the Tempio Civico Dell'Incoronata, Lodi (2002), and at the Total Music Meeting, Berlin (2001). It was in 2001 while playing at the Tonic, NY with IST and Company that Butch Morris came up to Simon and me, gave us a hug, and invited us to play on the following night for his Conduction #118. This only added more delight to what was already an amazing series of concerts for me.

Simon was thoroughly ethical in his approach to music making and to collective work. He was a great mentor and he set the bar high, as he should have. He was an insightful and critical intellectual who could dissect and respond eloquently to what was going on around him. This is evidenced in his long detailed letters to me as well as in his articles, ‘Report On The Composition Of Improvised Music 1 to 4’ published in Rubberneck magazine. He was later able to map out his analysis more fully in his Doctoral Thesis at Huddersfield University, “A more attractive ‘way of getting things done’ freedom, collaboration and compositional paradox in British improvised and experimental music 1965—75” (2017).

Simon and I were in touch several times earlier this year, planning future record releases, as well as IST’s twenty-five year celebratory concert which was planned for April 2021 at the Hundred Years Gallery, London. We were also planning for him to come to Swansea and play. Simon was dedicated, rigorous, virtuosic and I will miss his friendship and his music terribly. My love goes out to Jo Fell tonight.


support, if you can: PayPal to rhodrijd@yahoo.co.uk, Rhodri will donate the money to Jo Fell, Simon’s widow.